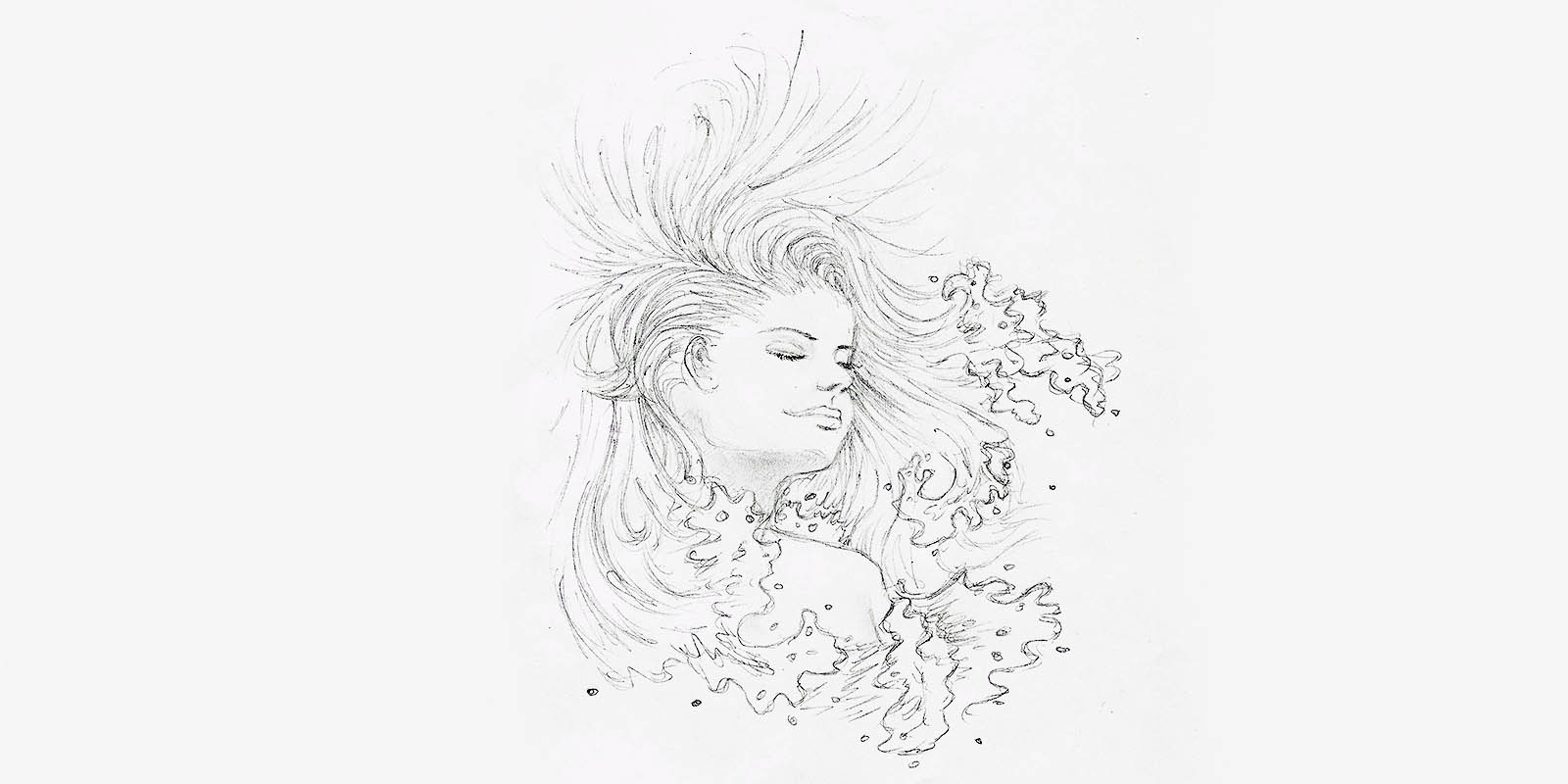 As the first edition of Dancing with Water neared completion, and as we began to contemplate artwork for the cover, I asked my 14-year-old daughter, Alicia, to draw the “Woman of the Water” that I had envisioned so many times. In my mind’s eye, I had seen the woman’s hair flowing in the water and I had seen the graceful, serenity in the image. However, my daughter was not the least bit interested. Alas… Every now and again, I asked her, “Any thoughts for the Woman of the Water drawing?” But nothing came.

Then late one evening, Alicia dropped a sheet of paper before me. It floated gracefully in the air, taking several seconds to arrive in front of me . . . and there she was . . . the Woman of the Water. I gasped. I couldn’t believe it. She was perfect! I scanned the drawing and sent it to Melanie. We both agreed; this was the image for the cover of  the book.

Melanie’s daughter, Elaya, is also an artist. She went to work on the drawing and gave it the full-spectrum of colors we had also envisioned. Elaya also helped us design a cover. It was beautiful! We sent it out to several others for their comment and were surprised—and disappointed—to find that not everyone loved it as much as we did. We were told it looked like a romance novel and that it limited our audience because it had no appeal to the scientific community. Even though the essence of water is deeply feminine, we had to agree, they were right. So, after all that effort and with the book nearly ready for print, we were in a dilemma.

As we asked ourselves over and over again, Melanie had the idea to photograph a spring. We both live in the mountains. There are plenty of places to photograph water but it was October and the scenery was anything but lush and beautiful. Where could we go to get a picture of a spring?  “Cascade Springs!” Melanie said. “It’s where I went just before the birth of each of my children!”…and out poured her story. Before each child had been born, she had been drawn to visit Cascade Springs—where the energy of new life springing from the Earth is strong. This time Melanie was too far away but Cascade Springs was just over an hour drive from my home.

I left on a beautiful Fall morning after the kids were off to school.  The short hike was wonderful and I gathered a bit of horsetail and ate watercress from the spring with my lunch. Then I took pictures and headed home. The photo that ended up on the cover of the book was taken that day and Dancing with Water was officially born two months later.

The Woman of the Water ended up being a watermark at the beginning of parts 1 and 2 in the first edition, and Alicia illustrated the 2nd edition of the book.

We could not find any results for your search. You can give it another try through the search form above.